Some 20,000 people turned out to Smooth Radio’s “Love Live Music on The Waterfront” event staged at the Pier Head, Liverpool before the stunning skyline of  The Three Graces.

The event was also streamed ‘live’ over the intenet so Russell, the star of the show, really did rock around-the-world that night with fans logging on from as far afield as Perth, Australia and Sacramento, California. 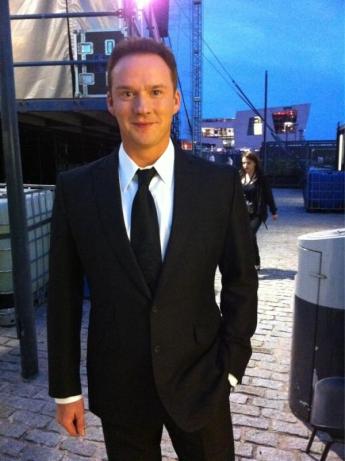 << Here’s Russell, backstage, getting ready to go on.  The picture was kindly provided by Phil Johnston via Twitter just for ‘the Russellers’ who were watching on the internet. 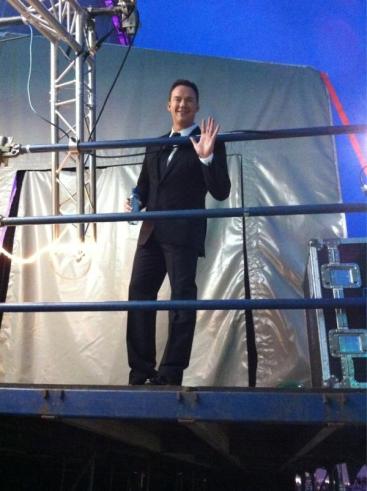 <<  and another from Phil.  Russell gives a wave for ‘the Russellers’ as he’s about to enter the wings.

The show’s host, Carlos, introduced Russell as “a national treasure” and he began with a powerful Granada  while Smooth Radio Tweeted, “The whole floor is shaking backstage here at #lovelivemusic with the power of @russellthevoice! “

He continued with Caruso and then  Race To The End  from his album ‘Anthems – Music To Inspire A Nation’.

Before  We Are The Champions  from the same album, Russell said that this was ‘for all the gold medals we’re going to take home… no, keep here!” to great cheers.

Land Of Hope And Glory  had the audience singing along and mostly waving their arms in lieu of Union flags, and then Russell bade Liverpool, “Goodnight”  but the crowd called out for more and wouldn’t let him go.

He chose to sing  Nessun Dorma  for his encore and that clearly delighted them; he’s not been singing it on tour of late and it was great to hear that final “Vincero” again.

The evening concluded with a mass singing of  The Beatles’  All You Need Is Love  in tribute to 50 years of  Liverpool’s own Fab Four, and then fireworks.

Since the event, Smooth Radio have been busy posting slideshows of the artists both on stage and back stage.  Just hover the mouse over the pink  <  or  >  to navigate, then click to enlarge a thumbnail.

There’s one of Russell with Gary almost hidden behind some equipment, another with Jocelyn Brown, and a last one  of him with a ‘mike’ talking on Smooth Radio in this slideshow of  Behind The Scenes.

Here’s their page with several pictures of  Russell performing; what a sight from the stage.

There’s another one of  Russell  on stage near the end of this slideshow of  The Show.

Maybe, if you went, you can  spot yourself  in The Crowd.

The event was (briefly) reported by the Liverpool Echo.

The whole programme had been streamed ‘live’ and here’s the video stream replay from Jocelyn Brown’s performance through to Russell’s, though it’s not as good quality as the YouTube extracts above.  You can, if you want, scroll to the 25 minute mark where Russell is introduced.

If you are from outside the UK and/or you encounter a page asking for your location, either click on the map, if shown, or enter a valid UK postode. The first three digits will suffice, so AB1 will allow access.  They ask this so that they can tailor advertisements to the most appropriate region if/when you listen to Smooth Radio via the internet.

Thanks to Smooth Radio for staging the event and posting the videos, and special thanks to Phil Johnston for the photos.

Smooth Radio have been arranging live outdoor concerts for several years and are hosting a “Love Live Music” event at the Pier Head, Liverpool on Saturday 21st July with Russell as the ‘headline’ performer.

This event is advertised as being completely free, no tickets, no prior registration… just turn up amongst the first 8,000.

There are some ‘conditions’, though, like ‘No Alcohol’, ‘No Glass’.

If you can’t make it down to the Pier Head, Smooth Radio have said that they’ll be streaming the concert ‘live’ over the internet from 6pm and it will be watchable from outside the UK, too.  They’ll also be showing videos afterwards on their website.

Please note that even though Smooth Radio broadcast on television channels with an audio only, the concert video cannot be transmitted over the TV as this is outside the terms of their broadcast licence.

Smooth Radio are also on  Facebook  and  Twitter   (@smoothradio) so if you’re thinking of going, or even staying at home, you can keep up-to-date with the latest directly from them.