Christmas Celebrity ‘Who Wants To Be A Millionaire’ : December 2011

Monday evening’s television was pretty well decided by the fact that Russell was to appear with Olympian Fatima Whitbread on ITV1’s ‘Christmas Celebrity Who Wants To be A Millionaire’.  Fatima was looking to win money for the charity 21st Century Youth while Russell was aiming to support The Princes Trust. 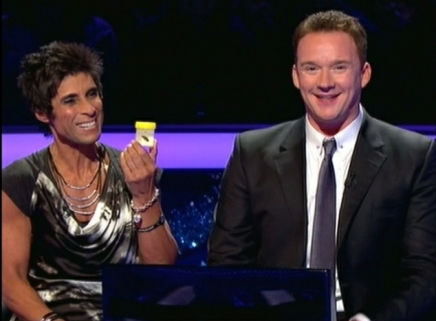 They were the third pair to come on the show and Fatima brought with her, in a sealed bottle of saline solution, a rather large cockroach that had apparently been stuck up her nose for some twenty minutes during the making of another programme… but we won’t dwell on that.

Fatima, “Lucky” the cockroach and Russell get settled in…
>

In the first rounds of fairly easy questions, the pair had only 15 seconds to answer and, after settling them into their ‘hot seats’, host Chris Tarrant opened with question number one…

“A combination of ‘Mistletoe’ and what provided Cliff Richard with a Christmas No 1 single in 1988?”
A: Gin B: Beer C: Eggnog D: Wine

and there was no hesitation in correctly answering “D:Wine”  to start them off.  The next question proved equally easy…

Russell knew it was “B: Martin Johnson”.

With £1,000 banked, the questions got a little more difficult but the time allowed increased to 30 seconds., so question three was…

“What colour is the lid on a regular jar of British Marmite?”
A: Red B: Yellow C: Green D: Brown

Again they had no problem with that and Fatima answered “B: Yellow” straight away while Russell quipped, “My mate, Marmite” from an old advertisement.

The fourth question had them a little concerned, though…

“Name the fourth ‘C’ used to describe the characteristics of a diamond – colour, cut, carat and… what?”
A: Cost B: Carbon C: Clarity D: Class

Russell seemed to hope that Fatima might know this; he claimed he didn’t know much about diamonds and they were supposed to be “a girl’s best friend” but they quickly agreed the answer was C: Clarity and safely reached £5,000.

With time running out, they chose to stop the clock and use the ‘phone-a-friend’ lifeline.  Russell said he would have phoned Gary, as “Gary knows just about everything, but he might not know Chinese” so they phoned Sue, a family friend of Fatima’s.   Fatima let Russell read out the question and alternative answers but Sue wasn’t 100% sure of the right one, either, though she suspected it might be C: Oliver Twist. The pair were inclined to agree and, happily, they were right to do so

The sixth question was…

“Which bone in the human body weighs only 2 ounces but supports the entire head, which can weigh up to 17 pounds?”
A: Atlas B: Clavicle C: Metatarsal D: Femur

Knowing a little something of anatomy, they eliminated all but  A: Atlas and gave that as their ‘Final Answer’ with just seconds to spare.  It was the right answer and they were £20,000 in hand.

Question seven was also a bit of a tricky one… 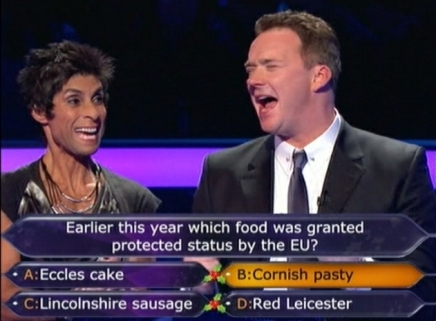 Neither of them was really sure and were debating the answer with the clock ticking away.  With 15 seconds left, they decided to use another ‘lifeline’ and ‘ask the audience’ who voted…

They chose to follow the vote (Chris said they were a clever lot, tonight) and were rewarded with £50,000 an extra ‘lifeline’ and getting rid of the clock.

“What is the dot over the lowercase i and j called?”
A: Title B: Tittle C: Trema D: Tilda 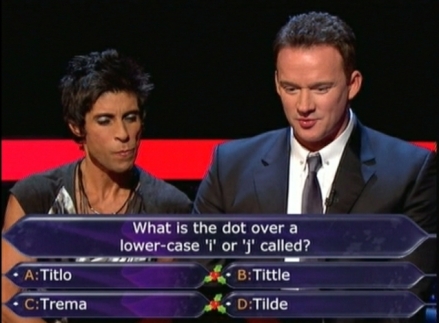 This was something they simply didn’t know and weren’t prepared to gamble on, so they used their newly won ‘lifeline’ to get rid of that question and face a fresh one.

Chris told them the correct answer was B: Tittle

“After J K Rowling, which children’s author sold the most books in the UK in the last decade?
A: Roger Hargreaves B: Dr Seuss C: Jacqueline Wilson D: Roald Dahl

Again, they weren’t too certain and chose to use their final ‘lifeline’, ‘fifty-fifty’ where the computer takes away two wrong answers, leaving one wrong one and the correct one.  They were left with ‘A’ and ‘D’ but still weren’t too sure.

Eventually, they decided on ‘A: Roger Hargreaves’ as their ‘Final Answer’.  Russell steepled his hands, looked upwards and implored the heavens, “Pleeease…”

After a ‘commercial break’ that must have been torture for them, Chris said to Fatima, “You originally said Roald Dahl and you were over-ruled by him.” 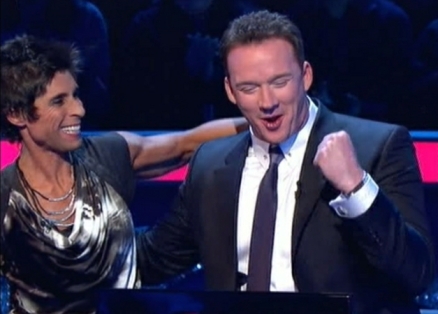 That was £75,000 potentially secured and they were rightly pleased with that as the audience cheered but, with no ‘lifelines’ left, question nine could either double that money to £150,000 if they got it right or lose them £25,000 if they got it wrong… the £50,000 being safe.

So question nine was…

“What is the name of the Queen’s first great-grandchild?”
A: Savannah B: Amber C: Ruby D: Abbey

It was total, “I haven’t got a clue” time for Russell and Chris teased, “I thought you moved in those circles…”

Fatima thought it might possibly be ‘B: Amber’ but wasn’t sure enough to commit to giving it as their answer, so they chose to take the £75,000.   It was as well that they did as Chris then revealed that the correct answer was ‘A: Savannah’.

A wise decision and a good performance.

Well done to both of them.

And maybe a nod to Fatima’s ‘lucky cockroach’.