Russell was the special Star Guest at a “Sold Out” fundraising concert at Southport Theatre and Convention Centre on Saturday 17th March 2012 in aid of the charity “ChildLine”.

“ChildLine” was begun 25 years ago by broadcaster and presenter Esther Rantzen to provide a free telephone helpline for children suffering from abuse or other problems. It later became part of the larger charity, the NSPCC (National Society for the Prevention of Cruelty to Children).

Although the telephone calls are free of charge to the caller, they still must be paid for by the charity and there is a constant need for funding.

Russell and Esther had appeared together on ITV’s “Daybreak” programme earlier in the week to promote the concert and Esther’s recently published book, “Running Out Of Tears“, that tells the stories of just fourteen of the some 2.7 million children that “ChildLine” had been able to help over the years.

Esther said that “Saved children save children” in an “upward spiral” but with the numbers still calling the help centres for advice or assistance their work needed to continue and so did the fundraising.

The concert was largely organised by and mainly featured local soprano Janette Monroe, so we only had Russell in the second half.

In the first half, after a recorded video welcome and introduction from Esther, local comic and radio presenter Steve Royle opened with jokes and audience-participation singing… well, actually, it was animal noises but we’ll not dwell on that.

Music for the evening was provided by the Greg Francis Concert Orchestra, with backing vocals from Ian Wilson,  Sue Quin,  Alistair Gordon  and  Steve Menzies  along with the choir of the Manchester High School For Girls  who sang “Dare To Dream” – originally sung by Olivia Newton-John and John Farnham at the opening of the Sydney Olympic Games in 2000.  Amongst Janette’s first half numbers were “The Impossible Dream” and a quite stunning “Canto Della Terra“.

In the opening of the second half of the show five young girls from the Southport Dance Academy performed to the accompaniment of the choir before Janette introduced Russell to the stage.  He immediately called for the house lights to be turned up so that he could see the audience and give everyone a wave.  He went straight into “Volare” and, after the usual instruction and teasing of the audience, leapt several feet down from the stage to go ‘walkabout’.

Regular Russellers would know that he enjoys the hugs and kisses, or even just handshakes, but there weren’t many takers from the locals who were perhaps not quite prepared for his genial approach.  He found some steps up to the stage and was spared the need to clamber back. 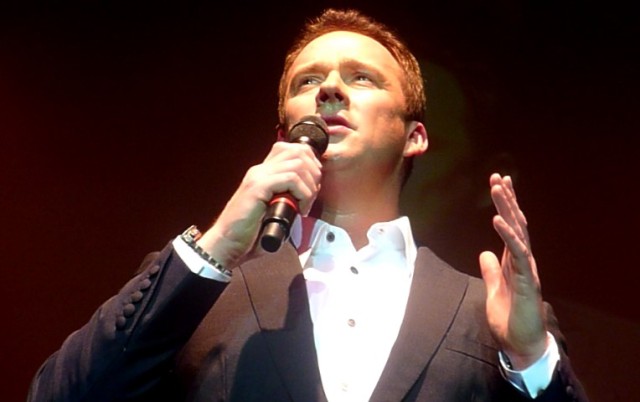 He sang a moving “Intermezzo” before lightening the mood again with “I Left My Heart In San Francisco“… which, of course, became “Sunny Southport” to the delight of the indigenous population and he also gave everyone an opportunity to take pictures. His final solo number was “You Raise Me Up” before he was joined by Janette for a superb version of “The Prayer“.

Russell left the stage for a time while thanks were offered to Janette by ChildLine’s local organiser, another Janette, Janette Drew, and the total raised during the evening was displayed on the ‘big screen’ – £30,460.00!

Russell was invited back to be presented with flowers, and to draw a ‘raffle’ – the prize being tickets to, and a ‘meet and greet’ at, his forthcoming concert at Speke Hall.

Russell then waved goodbye as Janette and Sue Quin led the audience in a closing song, appropriately enough “The Voice” but with piper Alan Gagan, in full Highland costume, giving it a special ‘twist’… a great finish to a great evening.> 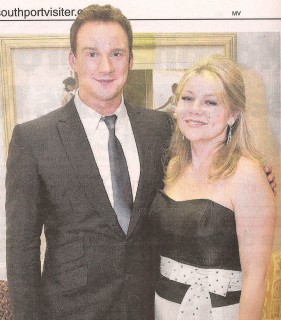 There was an online report, later, by the Southport Visiter that didn’t have any pictures but there were two pictures in the printed edition that followed. >

“Should I tell Russell Watson you can get backing tracks now, or would it upset a few people?  http://twitpic.com/8xojp5”
(Steve Royle – @steveroylecomic)

“Thanks to all the lovely people that I met on and off stage at the Southport Theatre for @nspcc childline . Was a pleasure working with you”

“Thanks to the lovely person who sent me this pic of me playing with Russell Watson (aka @russellthevoice) http://twitpic.com/8xy8u9”
(Harrison Wood  –  @HarrisonBassist)

“@russellthevoice  You were amazing on stage last night! Our MHSG choir girls thoroughly enjoyed the experience & it was great meeting you!”
(Izzy Chen  –  @IzzyMei)

“@russellthevoice @nspcc  From myself Janette Monroe and all at ChildLine Thankyou so very much couldn’t have done it without you. YOU’RE A STAR!”  (Janette Monroe  –  @JanetteMonroe)

“Well done to all @MHSG choir girls who performed on stage with @russellthevoice at the NSPCC concert in Southport on Saturday evening.” (Manchester High  –  @MHSG)